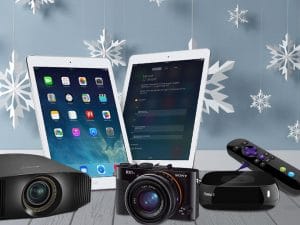 How is your Christmas shopping progressing? If you’re an early bird, you have most likely already finished a great deal of your Christmas shopping, wrapped the pressies and have them snug under the tree. Or have you’ve missed the window and now you’re stuck for ideas? Never fear, because we have a great list of ideas for the technology lover in your life. From the useful to the silly, the retro to the ultra-modern, here are plenty of ideas to help you finish your Christmas shopping.

All About the Vinyl

Once again, vinyl records are still making a comeback. Whether you’re after a vinyl player or vinyls in general, a music connoisseur is sure to love it.  No longer the preserve of the specialist music store, most online and brick and mortar retailers are selling them again along with the decks to play them on, and they aren’t just stuck in the 1960s and 1970s. They’ve been updated for the 21st century and you will find most have modern conveniences such as MP3 conversion, Bluetooth, and in-built DAB radio. Same as with the music, as they are now so popular, you might actually be hard-pressed to find music not in vinyl.

We’ve all got fond memories of the games we played as children, the fights that ensued over who cheated or who’s go it was next. Why would you not want to relive that?! Remembered fondly by most 80s children, the Nintendo Entertainment System, is back, as Nintendo Classic Mini Entertainment System. Pre-installed with 30 games to take you all the way back to your childhood. This 21st century model has a few upgrades though including USB connectivity and HDMI. Play your old favourites and new games in 8-bit, bask in the nostalgia and sibling rivalry.

From the retro gaming device to the modern. The Nintendo Switch Lite is – as the name suggests – a stripped down version of the parent model. Retailing at around £100 cheaper, it’s much more affordable than the original. It lacks TV connectivity and detachable joy-cons, it’s also a bit smaller than the original, plus, games with Switch feature will not work. If a handheld gaming device is all you want like your old-style Gameboy, this is the idea solution.

The Instant Polaroid Camera is prefect for pretty much everyone, who doesn’t love to take embarrassing pictures of family members napping after too much food? Great for scrap bookers or those who love candid pictures of friends and family. Nowadays it’s kind of a novelty to take pictures and have them as a paper copy straight away.

Smart Water Bottle (yes, it’s a thing) is an interesting one. If you struggle to drink enough water, this will light up to remind you to stay hydrated and doubles up as a Bluetooth speaker! What more could you want from a water bottle! *Water not included.

AI and smart technology took another step this year, and smart clocks are one of the most useful we’ve been able to find. The top seller from Lenovo does what it says on the tin – it’s an alarm clock, nothing new about that. However, it has USB connectivity to charge your mobile phone and if you use Google Assistant, it will link up for those other reminders, not just wake up calls. You can also set it to report important news in the morning such as weather and traffic updates. Nothing says I love you more than a Smart Alarm clock at Christmas!

Are you tired of the monotonous chore of stirring your own tea or coffee? Are you constantly on the go and cannot spare mere seconds of your life? Then the Self-Stirring Mug is perfect for you! It operates with a simple ON/OFF switch. However, not only does it just stir, if you hold the button down the mug will continue to stir until the drink is frothy – perfect for the coffee lover who loves steamed milk in their brew!