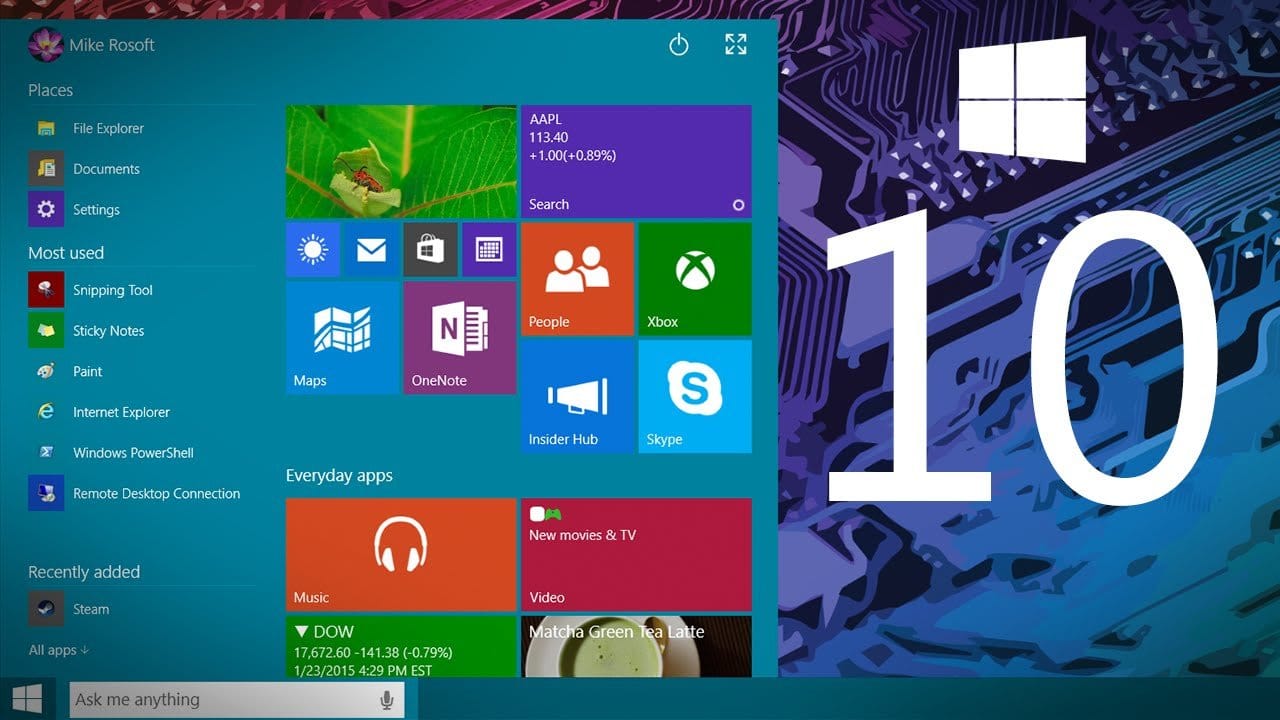 What is new and should I install it?

If you have been following the story of Windows 10 you will know that it is available as a free upgrade for anyone running Windows 7 or Windows 8.1. You may also know about all of its new features. These features look great, they look like Microsoft have listened to all the criticism thrown at Windows 8 and produced an operating system which not only meets user expectations much better than Windows 8 did, but puts control over the layout and user experience back in the hands of the user.

I strongly advise you install Windows 10 and take a look at the new features, but please do it on a test machine.

Let’s get this out of the way right here and right now. If you use Windows as part of a business network, if you use non-Microsoft software, and if you value your own sanity please do not upgrade to Windows 10 yet. Don’t install it on your critical machines, don’t install it in your production environment, and don’t be surprised if it doesn’t work properly.

I am a great advocate of Microsoft. I am a Microsoft partner and an MCP. I believe that Windows 10 has a huge amount to offer the business world with its new features and its innovations, but I am also a realist and I deal with the fallout of Windows “imperfections” every single day.

Every Windows version release to date has been preceded by useful new features being announced, and followed shortly by a varied mixture of praise and criticism. In the past it has taken a long time to iron out the initial tranche of bugs, and sometimes the operating system has not been worth upgrading to until the first service pack is released. I expect it to be no different this time.

This morning we have had a selection of clients upgrade some of their machines to Windows 10 without informing us in advance. As a result we now have a selection of users unable to connect to their network using their Cisco VPN client. It just doesn’t work on Windows 10, and I’m afraid this comes as no surprise to me. We will fix it because we are awesome, but had they tested a Windows 10 installation on a test machine first they would have known that some of their software wouldn’t work and could have made a better informed choice about rolling it our in their production environment.

Ok so that’s my rant out of the way, let’s look at some of the positive features of Windows 10 because I really do believe Windows 10 has what it takes to be a great operating system. 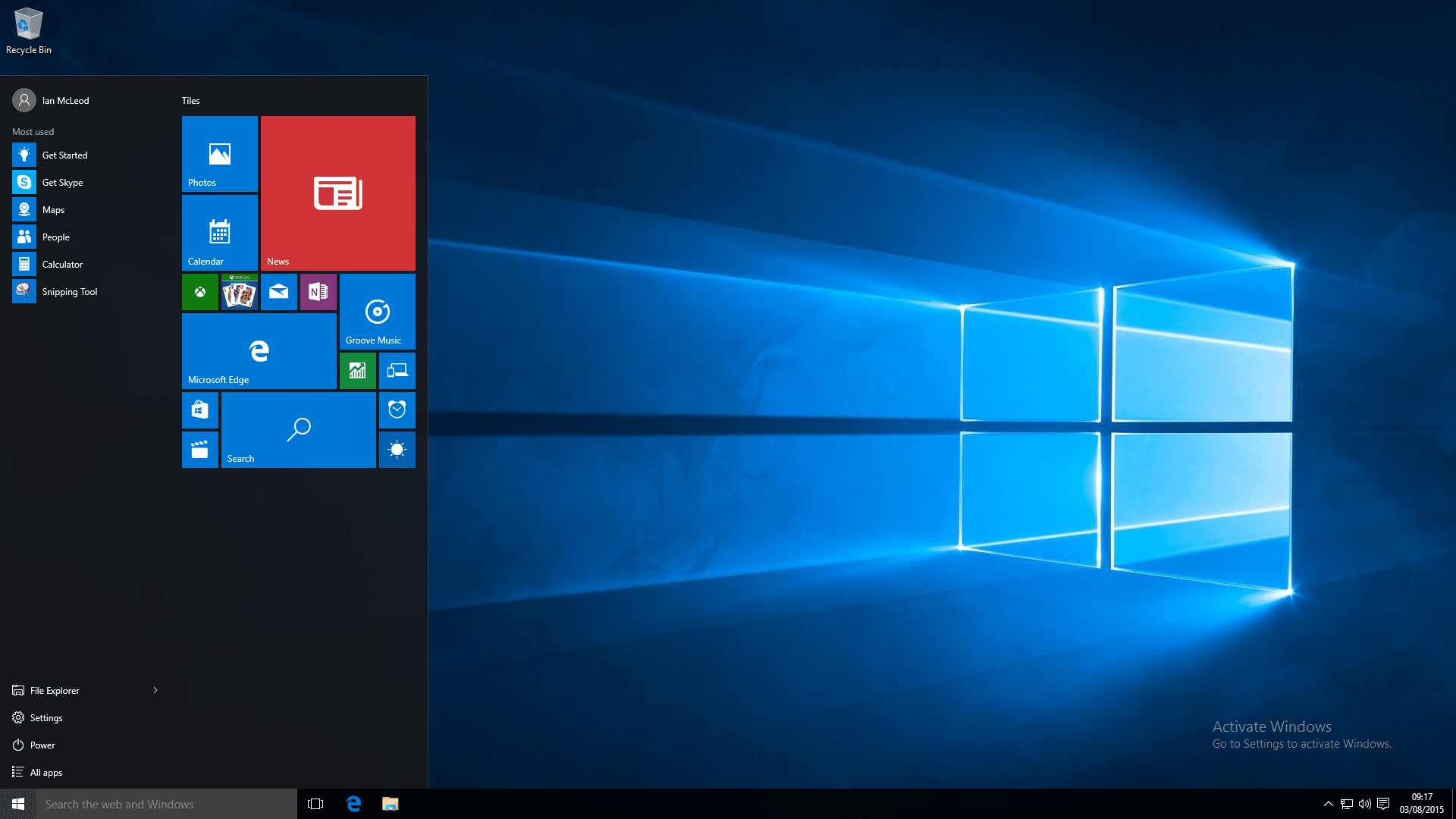 The Start menu has been a key element of the Windows OS since Windows 95. Microsoft killed it off with Windows 8, opting instead for the Start Screen. Windows users hated it, and in Windows 8.1 a compromise was made allowing you to load the desktop by default and avoid the Start Screen altogether.

In Windows 10 the Start menu has been recreated, blending the traditional Start menu on the left with the Windows 8 style Live Tiles on the right. This gives you a very customisable Start menu which will show you your recently added apps, recently used apps, file explorer, settings and power options on the left, and a completely customisable Live Tile area on the right. This area can be expanded, shrunk, or removed completely; and within it the tiles can be resized, rearranged, and sections can be given custom names.

NOTE: If you want to remove the Tiled area completely you would be forgiven for looking in Settings for an option to switch it off. Unfortunately Microsoft have not made it this easy, and you instead have to unpin each tile in turn until they are all gone. A hassle at the beginning maybe, but once it is done your Start menu has been customised and will remain this way until you add Tiles again.

The Start menu can be coloured to match your background or your Windows theme, and in Tablet mode it will completely fill your screen like the old Windows 8 Start Screen did, making it easy to use on a touch screen.

In addition the area in the bottom left of the Start menu can be customised to include Settings, Photos, Videos, Downloads, Documents, File Explorer and more. By looking in Settings, you can select the items you want to see in this area, making it easy to get to your frequently accessed folders.

I think that Microsoft have succeeded with this new Start Menu, with the default settings being useful and intuitive, but with the final layout ultimately being decided by the user.

The way that we use devices has changed. Most of us have a desktop PC, a laptop, a tablet and at least 1 smartphone. Microsoft want to provide us with a unified environment across all of these devices, one where the user experience is the same, yet tailored to the device it is being used on. The technology behind this they have coined Continuum.

Continuum means that your computer changes as your needs change, and Windows works out for itself what your needs are.

If you have a Windows Phone, it will present you with a style of Windows 10 interface designed for use on a small touch-only screen. If you connect your phone to an external screen, the interface displayed on the screen will follow the traditional desktop layout with your phone working as the touch interface. If you pair a Bluetooth mouse and keyboard to your phone it will behave like a traditional PC with the user experiencing mirroring that of a normal PC or laptop.

Windows 10 has been designed with multitasking in mind. The user interface has been designed to make it easy to switch from one project to another, even if that project involves multiple apps, documents and web pages.

Firstly let’s look at Snap. Snap is something that Windows 7 and 8 users will be familiar with already, when you drag an app to the top, edge, or corner of the screen it snaps into place either taking up the full screen, half screen or quarter screen. If you have lots of apps open at once Snap Assist for Windows 10 helps you arrange the apps more easily.

When you snap one app to take up half of your screen, Snap Assist will transform the remaining open apps into thumbnails, allowing you to easily select and snap another app into the remainder of your screen.

Secondly, Windows 10 has introduced Task View. This is a virtual desktop mode which allows you to organise your open apps, documents and internet tabs into virtual desktops, and switch between them when you change the task you are carrying out. 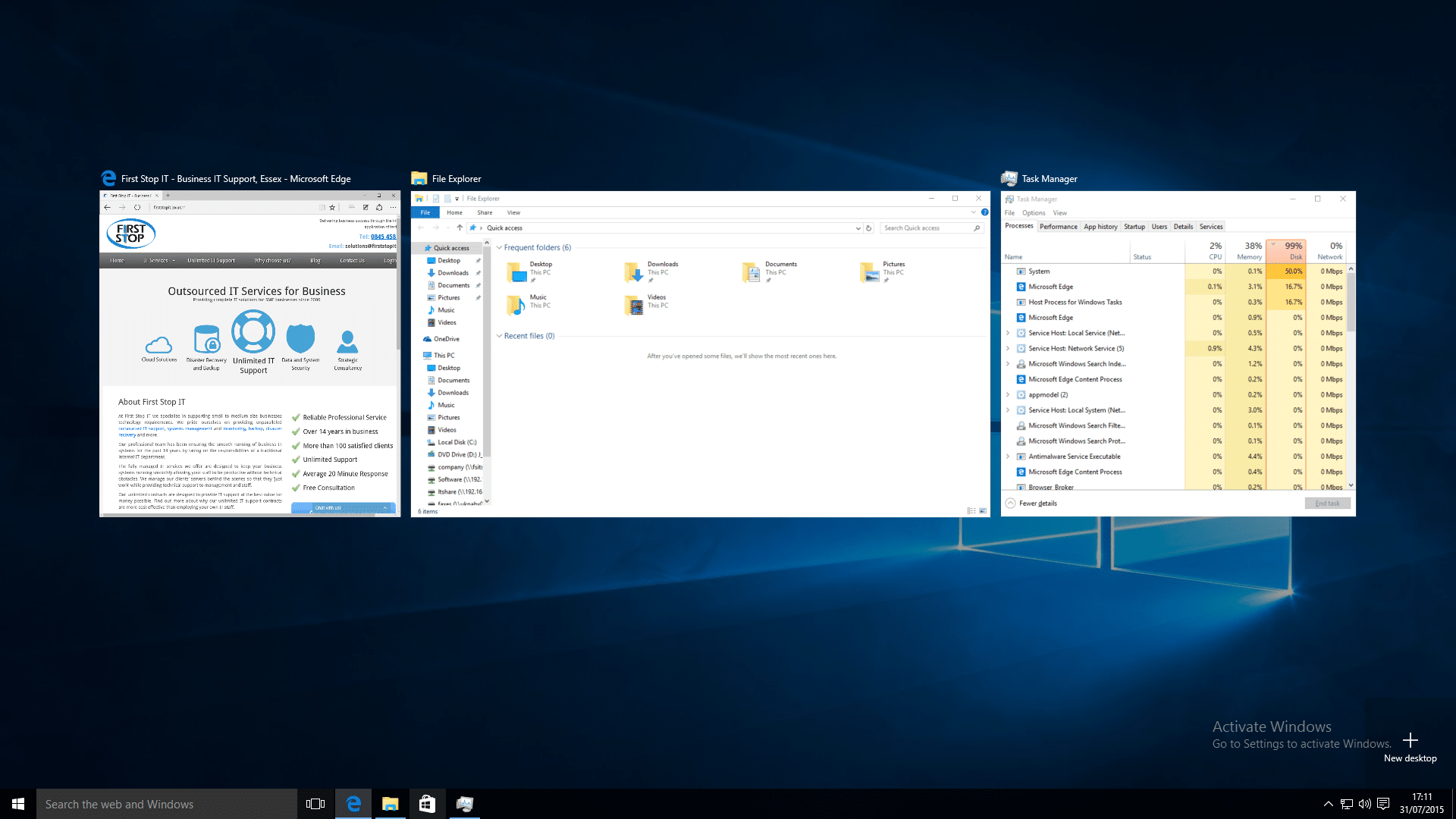 Cortana is context aware meaning you don’t need to learn commands but can instead speak in simple plain English. Cortana can be called up by saying “Hey Cortana” which is a neat addition but may cause problems if you have several Windows 10 devices in a small space.

Cortana can search your PC or the internet, she can bring up the weather forecast in your location or anywhere else around the world, you can set reminders for a specific time or place, launch apps, set tasks, dictate messages, send emails, chat, find your flight information and much more.

You can customise what information Cortana gives you by entering your likes & dislikes and controlling other settings in the Cortana Notebook. This way she can give you updates on your favourite sports team, or the local news, financial markets or other interests of yours.

The notebook is linked to your Microsoft account meaning that Cortana knows it is you no matter which Windows 10 machine you are logged into.
“Hey Cortana, find me a local coffee shop!”

Internet Explorer has been fighting a losing battle for a long time against the likes of Chrome and Firefox which are more user friendly, faster, more responsive and built for the mobile age.

In Windows 10 Internet Explorer has been replaced with Microsoft Edge. Edge has been designed to be light, efficient, modern, and to run on every device from PCs to tablets to phones. 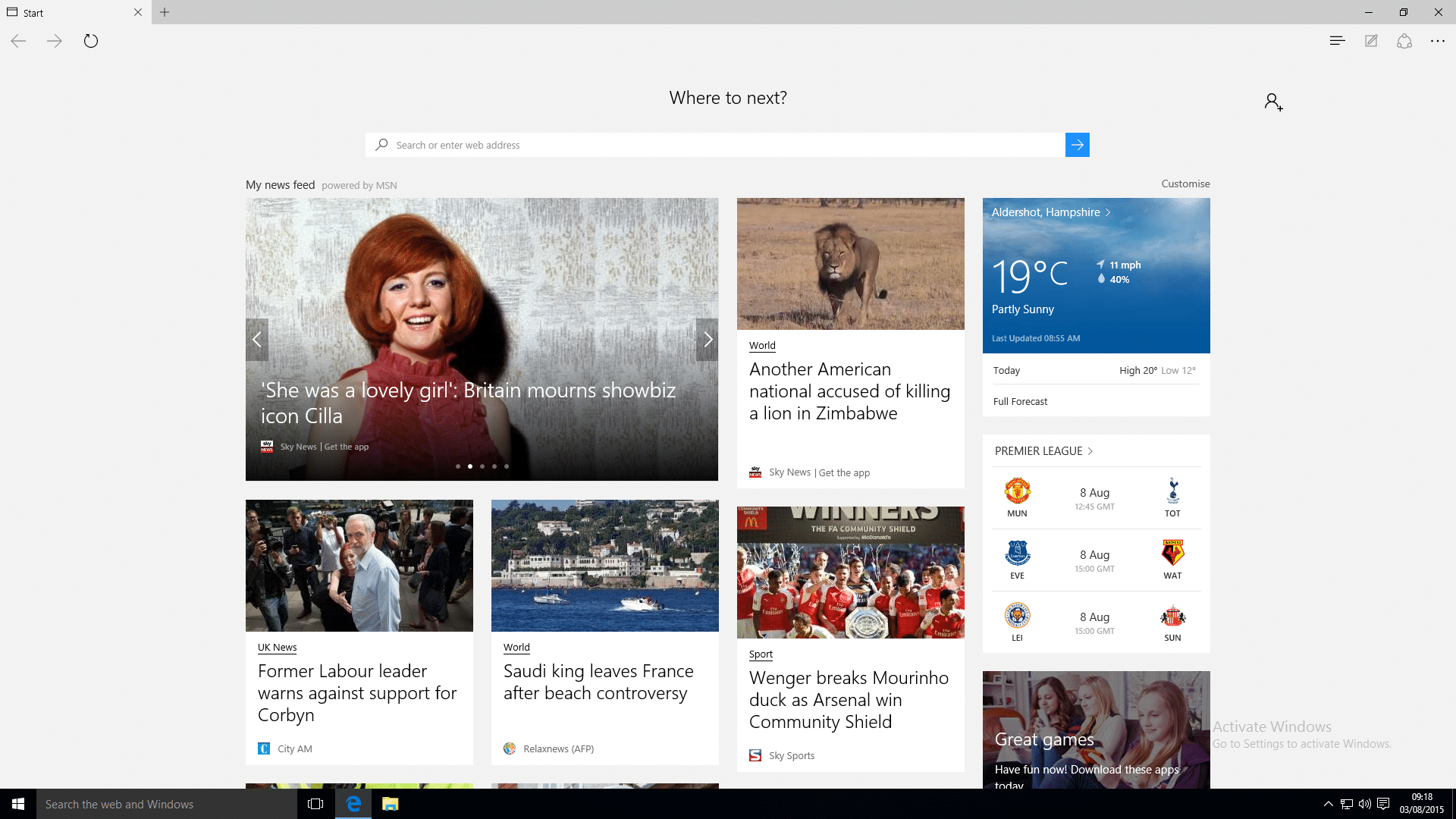 Most of the improvements are in the background though, and do not affect the user experience all that much. Edge has a nice modern minimalist look which makes efficient use of the space on your screen, and behind its uncluttered appearance there are some nice features.

If you really need Internet Explorer for something it is still included with Windows 10, it can be found it your All Apps list, or just ask Cortana.

Previously only available on Windows Phone and on Windows 8.1 if you used the Modern version of IE; reading mode strips away any fancy formatting and immersive features of a web page leaving you with only the images and text. This a great tool to use when you are reading a long article or knowledgebase, because it strips out any distractions. This can be enabled by clicking on the book icon in the top right of the Edge browser window. Within Reading Mode you can choose the background tone and text size to suit your own reading preference.

In Edge you can edit the page you are viewing either by drawing with your mouse or touch device, by highlighting text or adding your own text notes. These can then be saved as image files, sent to One Note, or shared with friends and colleagues. Not a new idea, but well executed in Edge and definitely useful if your role involves researching, collating information or sharing ideas.

Lastly, the reading list is another new feature. Similar to bookmarking a web page, reading list allows you to save individual articles in date order for reading later. It is a nice idea but doesn’t quite feel finished. Microsoft are pushing users to log into their devices with their Microsoft account, and whilst things like Cortana’s Notebook will follow you from device to device, the Edge Reading list does not sync across devices. Perhaps this feature will follow.

Some of you will love Windows 10 and think that the new features and the new look have made up for the shortcomings of Windows 8. Others will hate it, steadfastly sticking with Windows 7 until something more closely resembling Windows 7 comes along. Some of you will still be running Windows XP…………

Personally I like Windows 10, but will it really make a splash in the world of business IT?

Or will the arguments over data slurping, the subscription licensing model, and the unstoppable march towards a Microsoft-centric cloud world usurp Microsoft’s attempts to push us forward to a more unified and immersive computing experience.

Only time will tell.