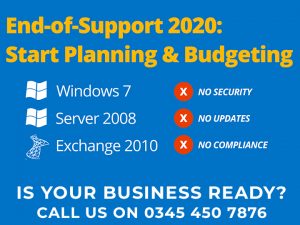 Ready for the end of Windows 7 Support?

Only 6 Months to go!

With 6 months to go until Windows 7 is no longer supported by Microsoft, what steps are you taking to ensure your PCs and laptops are updated or replaced?

In a previous blog, The Benefits of Switching to Windows 10, we outlined the benefits of Windows 10, and with January 14th looming ever closer, it’s becoming ever more pressing for you to get prepared if you want to meet that deadline.

Let’s face it, everyone liked Windows 7. It ran software easily, was user friendly and was more stable than the first iteration of Windows 10.  It was the most popular operating system until very recently, with Windows 10 just overtaking it in the first half of 2019. But times are changing, and your operating system needs to change too.

Why do I need to upgrade?

Windows 10 has vastly superior security compared to its predecessors. A lot has changed since 2009, when Windows 7 was released and that includes threats online.

…and that’s just to name a few.

Aside from the new security features in Windows 10, your old Windows 7 PCs will stop receiving security updates on 14th January 2020, meaning that newly discovered vulnerabilities will go unpatched and your machine will be vulnerable to new viruses and hacking tools.  With cybercrime on the rise, can you risk leaving your system increasingly vulnerable with Windows 7?

With Windows 7 on the way out, hardware and software developers will stop developing their products for it – those products that are essential for your business to run.  Of course there is a Catch 22 for some companies, with the odd few software packages that will not run on Windows 10.  These cases do tend to be few and far between and Windows 10 compatibility is better today than it has ever been.  You can run some older programs in compatibility mode, but we understand that it’s not always an option.

You do have a few different options at your disposal before the deadline of January 14th 2020:

Simply put, you need to do something.  Although some people have the mentality, ‘if it ain’t broke, don’t fix it’, leaving Windows 7 running on your computers will probably result in problems in the future.  Those might be viruses, data breaches, speed, reliability, or software compatibility problems.

To keep your business running smoothly, and protected from the latest threats, an upgrade to Windows 10 is the recommended approach.